How I switched from iPhone to Windows Phone and survived (just!). 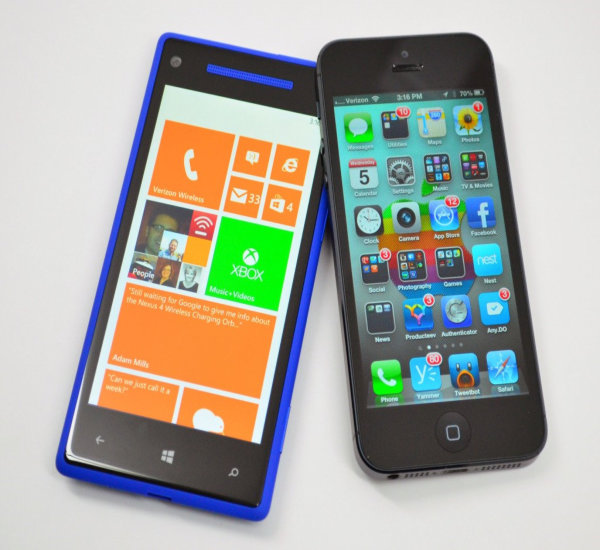 I suppose I have always been a “power user” when it came to phones. I’d moved from an old “feature phone” to a “smartphone” way back when the Windows Mobile/Pocket PC phones came out, notably in my case an O2 XDA. It seemed to be the way forward but then when Apple launched the iPhone, it was such a dramatic jump in ease of use, compared to a stylus (yes, stylus – seems bizarre now!) driven phone to a finger/touch driven phone. It made everything so easy… photos, web and especially music. And installing apps became so easy (compared to copying over ‘installer’ exe files and “running” them).

My first iPhone was a 3GS, then I had a 4S and then a 5S. I had all the apps I needed (too many actually). I’m a power user when it comes to music too… I’m fond of electronic music and have 18,000 tracks in my collection, all perfectly rated and classified into carefully crafted automatic playlists via iTunes. Even my car has a specific iPhone integration kit with dock that means I can access all that music from the steering/dashboard, complete with covers etc. being displayed on the screen. I was truly and utterly embedded within Apple’s ecosystem and there was no chance of moving to another phone.

At Solarvista, we are a Microsoft Partner and very much a developer based around the Microsoft stack. Lots of my colleagues had got Nokia Windows Phones. I had Windows at home and at work. I even had an Xbox under my TV connected to a surround sound system. The user interface on Windows Phones seems prettier and less “toy-like” than the iPhone. It seemed more grown-up typographically.

I was curious. I like things being consistent. And being totally Windows in all aspects of life except “the phone” seemed anti-pattern to me (OCD anyone?). And when it came to looking at a replacement for my 5S, I thought, hmmm… they are actually expensive compared to other phones.

I decided I would attempt to make the switch. I would get a Windows Phone next, NOT an iPhone.

I opted for the Nokia 735. It was 66% cheaper than an iPhone (yes, 66%!). It was a nice looking phone with a removable case that seemed very resilient to scratching. My iPhone, being metal, had picked a few scuffs and dents (again, I don’t like this – OCD again anyone?). If I scuffed the case of this one, I could just replace it.

So far so good.

The killer issue in all of this would be my music library. How would I make this work on the Windows Phone when everything I had was in iTunes?

The answer wasn’t easy. Microsoft’s equivalent to iTunes is Groove Music (formerly Xbox Music). Last year, Microsoft launched OneDrive support meaning that all my music could be backed up into the cloud by placing them into OneDrive. This would then make that music available on the web, on my Xbox and on my laptop and phone. This was an advance on iTunes. Groove Music is very much a cloud-based solution whereas iTunes is local-based, even though it does have the iTunes Match function to back-up and distribute access to other iPhones/iPads or iTunes running another PC/Mac (chargeable option).

Firing up the Windows Phone, all the music was there… in the cloud for streaming… all 18,000 tracks with cover art etc. But… Playlists were not. I used automatic playlists in iTunes based upon Genre and Rating, this allowing me to “rate as I listen”. These were not possible on Groove Music. The only answer was to create playlists in Groove Music manually for Genre and “Stars”. This is actually very easy in Groove Music on devices but it does take some time to manage.

My car, a BMW, can talk to the Windows Phone via Bluetooth but the range of features compared to the iPhone is poor. I guess, BMW just focussed on features specific to iPhone. In the end I now have both iTunes AND Groove Music. I get the best of both worlds. The cost is a little time in managing playlists.

The battery life seemed better than the iPhone which rarely lasted as long as a full day. I seemed to get about one and half days from the Nokia. The screen was bigger too.

Now, for all Office-based apps, as you would expect, the Windows Phone platform is well supported. It’s not great when it comes to other apps however. To be fair, most of the major apps are there (Facebook, Twitter, Instagram, LinkedIn etc.). Even the Daily Mail have an app (admission, yes, I do like to read it now and then!). Uber is there, as is Amazon, eBay etc. The apps don’t appear to be as well-developed however. I think this will change with the upcoming update to Windows 10 and Universal Apps; the final objective of Microsoft to unify apps for desktop, tablets and phones. Overall, most (not all) of the apps I used daily were there.

In conclusion, the process has been a little fraught but I’m happy with the Windows Phone. I like the “pretty” look and feel. I even think our own Solarvista LIVE Mobile app on the Windows platform looks better than the iPhone or Android versions (even though functionally identical). I like the almost “un-scratchable” back cover/case. I like the Live tiles which give you information at a glance (something that needs a swipe down on iPhone). I like the lower cost overall.

I don’t like the lack of apps. And the wider-world support (like from cars, audio systems, docks etc.) all relies on basic USB or Blutooth. But that’s all I don’t like. It will be interesting to see how app availability changes with the upcoming Windows 10 update. It may finally put the Windows Phone on a par with iPhone.

If you are thinking about which device to choose for your field service personnel, then the Windows Phone (or soon Windows 10 Mobile to be precise) would be a good choice.

UPDATE: 12 APRIL 2016
My phone updated to Windows 10 Mobile and it is big (big) improvement. It's great how it works similar (identical in some places) as my Windows desktop machine. The email in particular is easier to use.

UPDATE: 12 JULY 2016
My Windows Phone failed and I went back to my iPhone for a period of two weeks. I wondered if i would "stay with the iPhone" however, I found the opposite, I really missed Windows 10 Mobile.

Solarvista are a leading provider of cloud-based Field Service Software and Mobile apps. Our constantly evolving products are available in five editions to meet the needs of your business large or small both now, and in the future. Read more about Solarvista LIVE/X9 here and arrange a free trial or contact us for more information or to discuss your requirements. 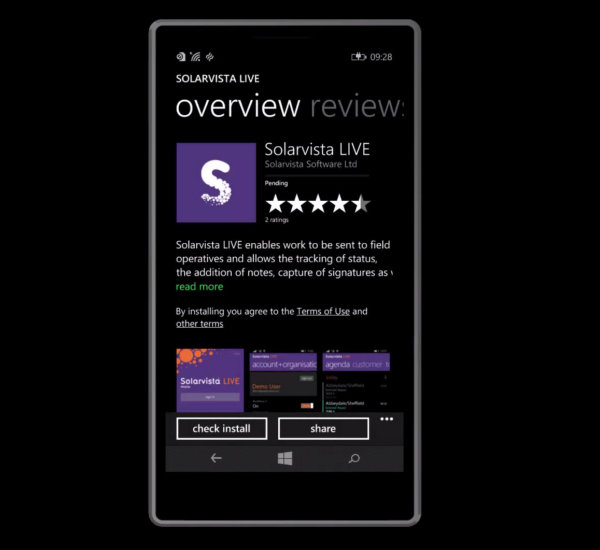 The mobile app is dead. Long live the platform! 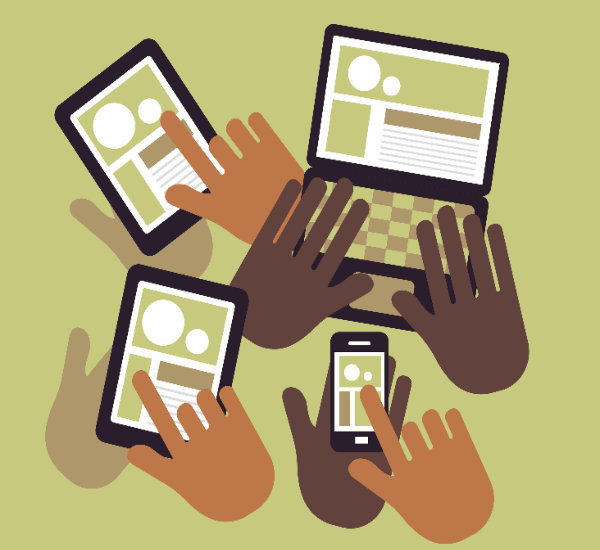